During the summer it became almost impossible to get into my greenhouse. Despite being planted in pots that were comparatively rather small, my tomato and tomatillo plants managed to grow to fill the majority of the volume of the structure, and having outgrown my somewhat inadequate bamboo-cane supports, proceeded to enmesh their branches together as they billowed ever upwards. It was as much as I could do to get in through the doorway far enough to water and feed them, so that was about all the attention they got.

Before we went away on holiday in September I decided the time had come to gather in the harvest, ripe or not (mostly not, no sun this year, grumble) because no one would be around to water the greenhouse. The tomatoes went into trays to ripen on a windowsill while we were away (which they did), but I ran out of room so left the tomatillos (still in their husks) in a crate in the greenhouse, hoping they would ripen too.

More than a month later I was beginning to despair that the tomatillos would never ripen. Some had turned purple, which I assumed was ripe, but most of them were still green or partly green. As a last resort to find a way to use them I did an internet search for what to do with unripe tomatillos, and as it turns out they are at their best when unripe! Immediately I set about preparing them lest they ripen any further! 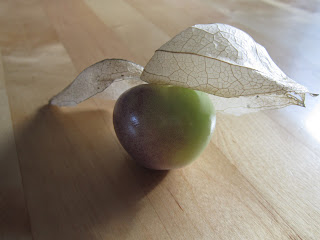 First I removed the husks and washed the tomatillos to remove the sticky residue left on the skin. I had noticed this stickiness before and thought it odd, but as I discovered from my googling this is a normal feature of the tomatillo. I then tasted the fruit raw, one green and one purple. The green fruit was acidic and pleasantly sour without causing me to pull a face. The purple fruit was still sour enough to be tangy but with a more rounded flavour. Not really like a tomato but reminiscent of something similar. As I had quite a few tomatillos I decided to make a salsa verde. I roasted the fruits first, then whizzed them up in a blender with chopped onion, lime juice, coriander leaves and seasoning. We ate some with roasted belly pork instead of apple sauce and the combination was delicious. 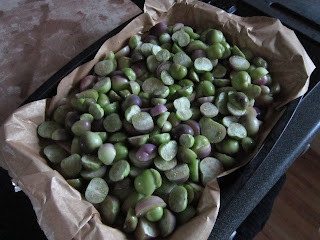 Chopped tomatillos ready for roasting
Posted by Claire Doore at 12:30