Last week I bought a large, sturdy jostaberry plant as a birthday present for my Dad. The jostaberry is a cross between a gooseberry and a blackcurrant and this parentage is reflected in the flavour of the berries. Jostaberry bushes grow quite large and have no spines. They are vigorous and productive once established and are resistant to several diseases which affect gooseberries and blackcurrants. They flower early in the year so there can be a risk of damage to the flowers from late frosts, but I've not grown them for fruit before so I don't know how much this is likely to be a problem in the south west of the UK. 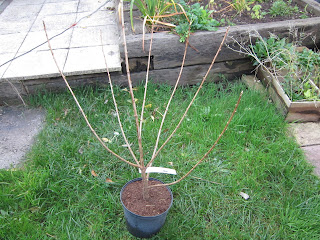 From previous experience (at work) I know that hardwood cuttings taken from jostaberries at this time of year are easy to take and root readily, so before I gave the plant to my Dad I took the opportunity to propagate a few free plants for myself for next year!

Using a sharp, clean pair of secateurs I took a cutting around 12 inches long from each of the main branches, making my cut just above an outward-facing bud on the parent plant. I then trimmed up the bottom of each cutting, making a horizontal cut just below a bud, and snipped off the tip of each cutting by making a sloping cut just above a bud. This left me with seven cuttings of around 9 inches in length, each slightly thicker than a pencil. 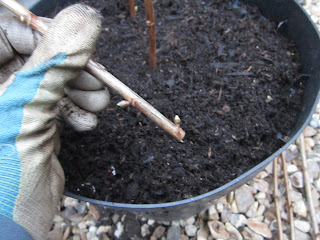 Bottom of the cutting 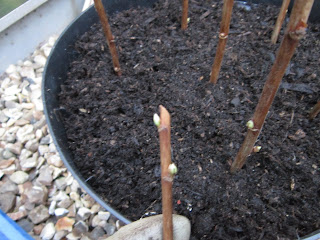 Top of the cutting

I pushed the cuttings into a large pot of compost (mixed with grit or perlite for drainage), watered them in and placed the pot in my greenhouse, which will remain unheated through the winter. A cold frame would also be fine. Now I just have to wait until autumn next year when they should have rooted well enough for me to separate them and pot them up individually or plant them out. 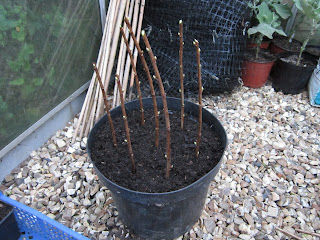 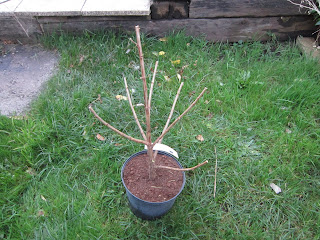 The parent plant left tidy and ready for planting.
Posted by Claire Doore at 12:55