Strawberries always seem to me to be such generous plants. They produce some of the most satisfying and delicious soft fruits and they also readily propagate themselves, spreading by runners which form chains of young plants all linked to the parent. 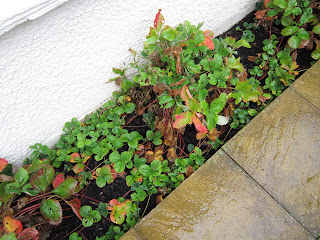 My container-grown strawberry plants have been putting out plenty of runners over the last few months, which I've allowed to root down into the layer of composted bark which the strawberry pots sit on. This time of year is ideal for separating those runners from the parent plants and potting up the rooted plantlets as individuals ready to grow on for planting out next year, so I spent this morning doing just that. 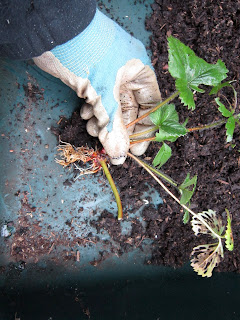 All I had to do was cut the runner where it grew from the main plant and gently pull so that all of the roots of the strawberry plantlets came away from the bark chips (if the runners had rooted into the ground it would have been simple enough to lift them out of the soil using a trowel). I then cut the runner into separate plantlets and removed any excess bits of runner or any damaged and yellowing leaves, leaving three leaves on each plantlet.

Removing some leaves helps to minimise water loss from the young plant while its root system is still small (the more leaves the plant has the more water it will lose by transpiration). I did my potting on a damp, overcast day which helps to prevent the roots from drying out while they are exposed to the air. Sometimes there is some transplant shock if the roots do dry out and the plantlets may look wilted for a few days, but they will soon recover.

I potted up the plantlets into compost in small pots, firming the compost around the roots and watering in well. 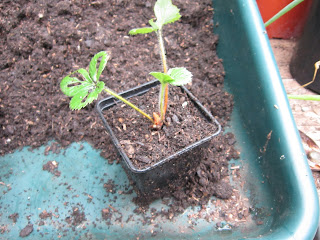 I've laid out the potted plantlets in trays in my greenhouse to give them some protection while they root out and they'll stay in there through the winter before I harden them off in spring for planting out. As I'm growing four varieties of strawberry I've also labelled them so I can easily tell which is which. 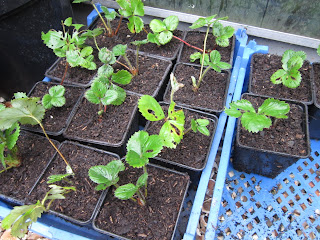 This year I grew Honeoye, Red Gauntlet, Mara des Bois and Sophie varieties in large plastic pots on the sunniest side of my patio. I chose these varieties to give me strawberries to pick throughout the season, from early to late. Despite the difficult weather and hordes of munching slugs I did get some strawberries, although not as many as I'd hoped, and the plants were quite high-maintenance, requiring lots of watering (when it wasn't raining!) and I fed them with seaweed-based liquid feed weekly.

Honeoye was certainly the earliest to crop and the berries were quite large and fairly sweet, with good colour and classic strawberry shine and shape. Red Gauntlet cropped very disappointingly - most of the berries produced turned brown before they ripened so I only ate a few. They didn't ripen very well and weren't very tasty. I assume this is due to the weather and maybe Red Gauntlet simply needs more sun.

Mara des Bois was undoubtedly the star variety for me. Not massively productive but delicious - juicy with great flavour, and being a perpetual variety it carried on fruiting throughout the season. I even picked some in September! Sophie was the late season variety I chose and the plants put on lots of leaf growth through the first part of the season, looking very lush and healthy with huge, dark green leaves. They did produce some berries, although not many, which were large, juicy, sweet and had very red flesh.

Now that I have some more space on my allotment, I intend to grow strawberries in the ground next year rather than in containers. Hopefully by potting up the runners from this year I will have plenty of new plants for my planned strawberry bed, for only the cost of the compost I've potted them in.
Posted by Claire Doore at 13:25