Saffron on the Windowsill

Growing herbs in a limited space can be more rewarding than growing vegetables for the simple reason that they offer the chance of a kind of self-sufficiency. No matter how productive my tomato plants or my radishes are I know I will be buying many more of them to eat than I can grow in the space that I have. This means that while my home-grown produce takes a star turn at the occasional meal it is never more than a fleeting accompaniment to food from further afield. Not so with the herbs! The intensity of flavour in each rosemary leaf, sprig of mint or cup of chopped parsley means that a little herb goes a long way - or at least far enough that my containers provide enough for my needs. I won't be harvesting any horseradish until autumn next year, but when I do there should be plenty of root to see us through a winter of roasts with homemade horseradish sauce.

To extend this herbal self-sufficiency further I have decided to try growing the spice renowned for its flavour and expense, saffron. I've only cooked with it once before, but my reasoning is that as most recipes recommend it is used sparingly, I may be able to grow enough to serve my needs.

I ordered corms online, trusting that I would be sent genuine saffron and not any other kind of crocus, as saffron is the only species which produces edible stamens. Hopefully, when they flower it will be obvious whether they are true saffron or not from the size of the stamens and from the look and shape of the flowers. The corms are rather beautiful in themselves, heavy for their size with a silky, papery surface. Some of them have rather promising-looking small white shoots beginning to push outwards. 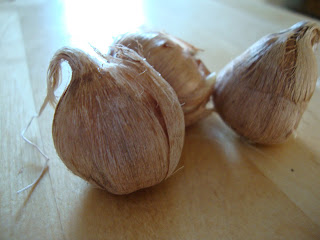 I have planted the corms a couple of inches deep in three-litre sized pots, five corms per pot. Hopefully, this will give them enough space to grow a decent root system without swamping them in a container which is too large. I gave them a light watering to settle in the compost and put them on a sunny windowsill - now all I can do is wait. Apparently, they will flower sometime between October and December of this year, fingers crossed.
Posted by Claire Doore at 10:01