Growing in containers means I've got limited space to play with, and I can't really get going with autumn and winter vegetable crops until the summer ones have finished. I have to decide how long to keep the summer crops growing before I remove them to make way for the next batch of vegetables. My windowsills are crowded with seedlings which need to go outside so that I can keep them growing while it's still relatively warm. 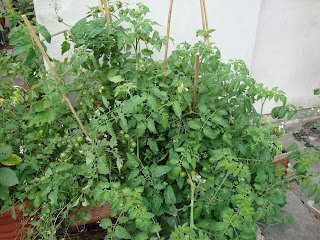 At the moment I'm harvesting tomatoes from four large plants growing in two bags of compost, but they're taking their time to ripen and I'm considering picking them green for chutney or ripening them indoors. I'm also picking radish pods whenever I go out to water the containers. They're juicy and crunchy and sometimes surprisingly hot, with a hint of the flavour of raw cauliflower. Chard and red mustard leaves are now large enough to be picked for salad.

Happily my late nasturtiums are flowering - I thought I hadn't sown in time but I now have rich blood-red flowers hovering amongst the dark green leaves like snake heads. The name of the variety is 'Cobra' which now seems very apt.

As for the herbs, the peppermint is forming a large productive plant which is giving plenty of tips to pick now for tea, and will give me lots of leaves to dry for tea in the winter when I cut it back in a month or so. I've already cut back the lemon balm, garden mint and feverfew. Yarrow and skullcap are both still flowering under the shade of the tomatoes, and the horseradish is producing large, leathery leaves. Winter savoury and rosemary are looking less happy, as they love hot, dry weather. I will try potting them up with plenty of grit to give them a boost.

On the windowsills, my next batch of parsley is coming on, as well as salad burnet, which has a lovely cool cucumber flavour. And I'm growing Plantago coronopus as a new perennial salad leaf to try, which is nearly ready to pick. My little myrtle bush is covered in green berries which I'm hoping will ripen, although I'm not sure what I will use them for as I won't get enough for myrtle gin. They are purple when ripe, quite tasty but somewhat astringent. 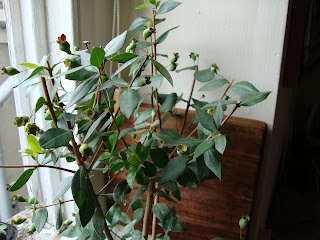 I'm also bringing on some tree onion bulbils ready to go outside next year. This is an interesting perennial onion, Allium cepa proliferum, which forms bulbils at the top of its leaves in the summer that will root to produce new plants. 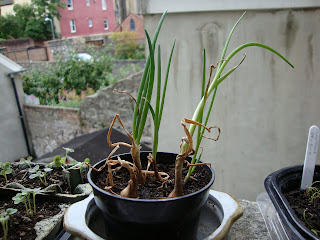