Watercress (Nasturtium officinale) is one of my favourite leafy greens, with its rich, dark colour and spicy, pungent flavour. It goes well in salads and soups and I'm even eating it in omelettes at the moment, just wilted by the heat of the eggs as they come out of the pan. My home village in Wiltshire has a fascinating history of growing watercress, providing local employment for the villagers until as recently as 1970. It lies in a flat-bottomed valley with meadows which were once flooded by river water, although now the watercress beds are gone and the land has been drained, only flooding occasionally in winter.

But I read recently that although watercress thrives when planted in gravel beds under clean running water it can also be grown in soil as long as there is plenty of moisture. Apparently, the obliging watercress plant will also root easily when placed in a jar of water providing it has been freshly picked. As I buy watercress regularly (in bunches of stems and leaves, not just bags of leaves) I thought I may as well try rooting some stems to see if I can grow some, so I took several of the most sturdy-looking out of the bunch, trimmed off the base and put them into a pot of water on the windowsill with a clear plastic bag over the top (to stop the leaves wilting too much).

Less than a week later the stems have grown lots of spidery white roots and I have removed the plastic bag. They are even growing new leaves. My next step will be to pot up the stems individually and grow them on into sturdy plants so that I can try planting them outside, probably at the allotment. It will be interesting to see how they grow and how much water they need to give a good crop of leaves. 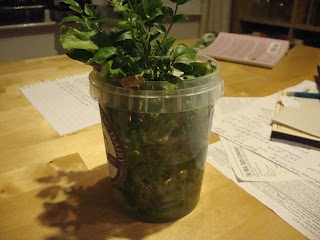